Celebrating 10 years of the Learning Network

Borders Voluntary Community Care Forum (BVCCF – now Borders Care Voice) – carried out an audit of the training needs of the independent and voluntary sector providers in 2008-2009.

When that report was submitted to NHS Borders and Scottish Borders Council (SBC), BVCCF was invited to submit a proposal with staffing and running costs for the a learning network,  starting during the summer of 2009.

The organisation worked closely with Bill Sim of social work training, who was very supportive of BVCCF taking on this role. It was uniquely placed to co-ordinate such a network across all sectors of care.

The Learning Network was a new collaboration between BVCCF, SBC and NHS Borders and a resource for everyone working in community care in the statutory, voluntary and private sectors. 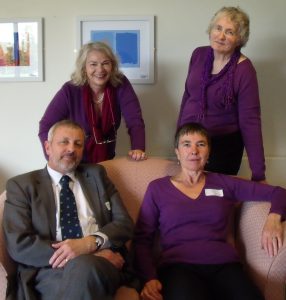 Meg and Joan (back) with Mary and Bill Sim

The network was to provide a central point of contact offering training and learning opportunities to all staff, volunteers, service providers, service users and carers.  Meg Roper, Joan Lawson and Mary Daykin were the part-time staff tasked with taking forward the two-year pilot.

Initially, Mary and Joan carried out an in-depth audit of care providers with Meg taking forward a local training programme for 2010 onwards.

Since then, the network has continued to grow and has developed a wide-ranging programme of training courses and other events.