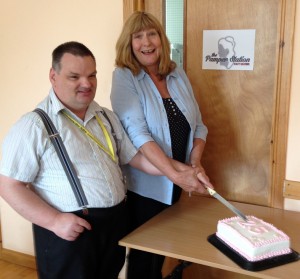 David Tawse, one of the founding members of the group, is pictured with Anne Suckling, a former support worker, at an event to mark the silver anniversary.

There are five groups in the Scottish Borders, in Kelso, Duns, Hawick, Galashiels and Peebles. Members meet and talk about issues that concern them, and respond to consultations about developments in local services.

David, from Peebles, gave a whistle stop history of People First Borders. One of its early campaigns was for an end to the use of the offensive label “mentally handicapped”. Since then, the organisation has continued to be involved in a range of campaigns on local and national issues and its members are empowered to speak up about matters that affect them.