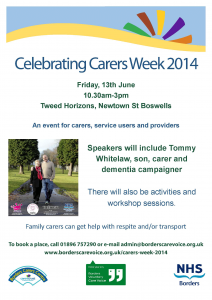 Speakers will include Tommy Whitelaw, from Dementia Carer Voices.

His experiences during this period drove him to start an awareness campaign across Scotland’s towns and cities in 2011, collecting hundreds of life story letters from carers detailing the issues they face in caring for a loved one living with dementia.

Since then, he has engaged with thousands of carers through his ‘Tommy on Tour’ blog. This is Tommy’s first visit to the Scottish Borders since he started his campaign.