Shirley Barrett will be known to many of our colleagues and partners as she is also employed by Scottish Borders Council, working within Joint Health Improvement on Suicide Prevention.

Shirley said: “I’m delighted to have been employed as the Mental Health Development Worker, replacing Meg Roper, who will be a hard act to follow.”

Meg is still with BVCV in her role with Borders Care Learning Network (BCLN).

She began her career as an office junior in Duns at Homac Frozen Fish, working up through the ranks to trainee accounts officer and even moved to London for a while to work in Billingsgate Fish Market.”

After returning home to return her family’s business, Shirley went on to do Personnel and Training at Ballantyne Cashmere in Innerleithen and Burtons Biscuits before becoming Training Development Officer at Partners in Advocacy.

“That’s where I became passionate about people being heard and being included as the norm,” she said. “Although I then moved from advocacy and spent over five 5 years with

Royal Bank of Scotland as a Training Design Consultant, I never lost the longing to get back to supporting and empowering people”.

“I was born and brought up in Innerleithen, but moved around a bit and have now resettled back in Peebles. After having to give up hockey, I’m now a very keen gardener, which includes an allotment. And since getting ‘new knees’, I’m starting to get back walking with my husband, Sandy, and my two Border Collies Midge and Jip.” 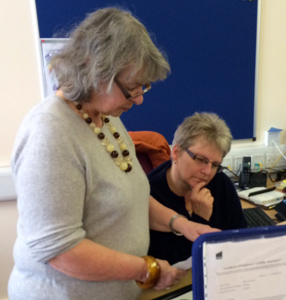