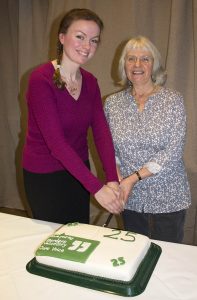 Borders Voluntary Care Voice celebrates its 25th anniversary this year. It was established in 1991 as Borders Voluntary Community Care Forum (BVCCF), in response to the NHS and Community Care Act (1990). Its remit was to act as a channel of communication between the health board and the local authority on all matters to do with the planning and provision of community care.

An event to celebrate the 25th anniversary was held at The Buccleuch Arms in St Boswells on 6th December. Around 50 representatives from NHS Borders, Scottish Borders Council  (SBC) and third sector organisations – and service users and carers – enjoyed lunch and a trip down memory lane.

Former SBC Director of Social Work, Andrew Lowe, returned to the Borders as one of the guest speakers, three years after his retirement, and talked about the vital role of BVCV in health and social care.

BVCV Co-ordinator, Jenny Smith, said: “We were delighted to celebrate our special anniversary with so many members, partners, colleagues and friends.

“It was lovely to see people who were around in the early days of BVCCF, many of whom still support us in various ways, as well as those who have become involved more recently.

“The event was a great opportunity to look back at what we have achieved over the last 25 years, and to look forward to the years that lie ahead.”

John Lamont MSP lodged the following motion in the Scottish Parliament, which was supported by several MSPs including Christine Grahame and Claudia Beamish: “That the Parliament congratulates Borders Voluntary Care Voice (BVCV) on 25 years of supporting and promoting good practice in the planning and provision of health and social care in the Scottish Borders; commends everyone involved in the organisation for working with others to improve service quality for the benefit of Borderers; believes that, as the leading independent organisation offering free training and support for health and social care workers and care volunteers, BVCV has contributed greatly to supporting this vital sector, particularly in an increasingly challenging environment caused by an ageing population, and wishes all at BVCV well for their 25th birthday celebrations in St Boswells.”

Christine Grahame MSP also sent us a message: “Please give my best wishes to all at Borders Voluntary Care Voice on your 25th Anniversary. Whilst I’m disappointed I can’t be with you in person to celebrate your quarter-century, I am delighted that you’ve reached this milestone – it’s a testament to the dedication of all of those involved with BVCV over the years. BVCV fulfils an important role in our local community, giving those on front line of care, both as carers and service users, a strong voice. I also commend the efforts you make to include unpaid carers, often family, in your work especially with regards to the provision of free care training. Health and Social Care is an area which will affect all of us at some point, and your efforts in ensuring it works for all are exemplary. I look forward to hearing what BVCV achieves over the next 25 years and I hope you all thoroughly enjoy your day.” 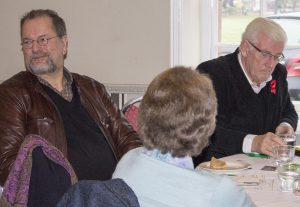 Find out more about the history of BVCV.